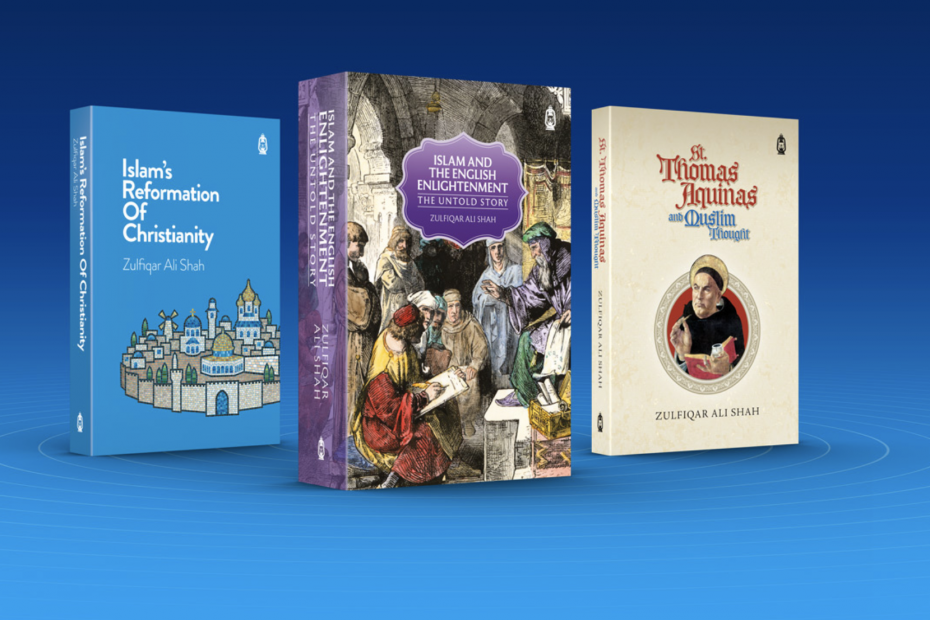 Zulfiqar Ali Shah’s Islam and English Enlightenment: The Untold Story offers an important and hitherto underappreciated account of the impact of Islamic theology on the development of European and particularly English Enlightenment, tracing the path from the early Reformation through the development of Antitrinitarianism and the Enlightenment. This is a book that anyone interested in stepping outside a Eurocentric view of the rise of the West and of the modern age must read.

Blurb for Zulfiqar Ali Shah, Islam and the English Enlightenment: The Untold Story

In this compelling and comprehensive study, Dr Zulfiqar Ali Shah responds with clarity and precision to those who continue to maintain that Islam is in need of some form of rational ‘enlightenment.’ Against such uninformed and Eurocentric accusations, Dr Shah convincingly demonstrates the central role that Islam – grounded in scientific enquiry, religious toleration and rationalist thought – played in shaping the values and ideas of the very Enlightenment reformers such as John Locke and Isaac Newton who helped to produce the modern world. While centrally focussed on examples from seventeenth- and eighteenth-century England, Islam and English Enlightenment ranges widely, engaging global connections to Europe from the Renaissance that illustrate debts to the emergence and development of Islamic philosophy and science. This study provides an indispensible guide to how Islam and Muslim thinkers provided the principles and ways of thinking that challenged the superstitions of the medieval era and without which there would have been no Enlightenment.

Although traditionally underexplored, the relation between Enlightenment and Islam is crucial to appreciating the complexity of the making of the modern world. With this book, Zulfiqar Ali Shah offers a significant contribution toward a better understanding of the role that Islamic religious, philosophical, scientific, legal, and political ideas played in the Age of Enlightenment. This impressively erudite book indeed shows that many important English thinkers of the seventeenth and eighteenth century, including religious enlighteners as well as radical Enlightenment philosophers, were deeply interested in Islamic concepts and, to a certain extent, were also influenced by Islamic views on scientific investigation, communal life, natural religion, and primitive Christianity. Thus, this book accomplishes a twofold purpose, as it sheds new light on the impact of Islamic intellectual traditions on Enlightenment culture and it provides a thought-provoking reassessment of Islam in itself, which Dr. Shah depicts as compatible with Enlightenment principles, values, and practices.

Students of European intellectual history are made to believe that the European renaissance has its roots in its liberation from church authority and rediscovering the Greek spirit of thought, the ideals of Liberal democracy, freedom of thought and critical thinking. The transformatory role of Muslim intellectual tradition in this process is confined to transfer of Greek thought through their Arabic translations.

The scholarly work of Dr. Zulfiqar, Islam and English enlightenment: The Untold Story is an evidence based exceptional and valuable contribution to the world of knowledge on the foundational role of the Muslim thought in the intellectual development of the so-called Western enlightenment.

My personal greetings on this remarkable contribution

“While the debt that the European Enlightenment owes to Islamic civilization has been, of recent, duly acknowledged, few have taken on the challenge of meticulously demonstrating how precisely the philosophy and theology of key European thinkers were shaped by their Muslim counterparts. In this well-researched yet extremely readable volume, Dr. Zulfiqar Ali Shah has done a tremendous job of connecting the dots and showing how key doctrines and notions that emanated in Muslim lands migrated from Arabic sources to Latin treatises. After reading this work, the reader will be able to prove that had it not been for Islam’s unique contributions, both the Reformation and the Renaissance, as well as Enlightenment projects, would not have occurred as they did.

In the face of rising anti-Muslim sentiment, this work should hopefully cause modern Europeans to understand that far from being an alien ‘Other’, Islam has intrinsically interacted with and fundamentally shaped key notions that have defined the essence of modern European and Western civilization.”

Over the past twenty years I have had the great privilege to introduce scores of students to the Islamic tradition. The most meaningful assignment I give them is to research an area of medieval Islamic culture to present to the class. Some groups report on advancements made in mathematics by Muslim scholars like al-Khwarizmi. Others report on areas like biology and medicine, physics and engineering, art and architecture, astronomy and more. Students never fail to be amazed by the great cultural achievements of the medieval Islamic world, especially when they encounter achievements they thought (and were taught) resulted from the work of European Enlightenment thinkers like Leonardo da Vinci or Nicolaus Copernicus. Could Ibn Khaldun really have developed a theory of evolution centuries before Charles Darwin? Could Muslim astronomers really have calculated the circumference of a round earth before Columbus discovered that the earth was not flat? Could Muslim physicians really have been removing cataracts so many centuries before modern Western medicine?

Nothing impresses on my students the bias inherent in Western education more than this assignment. How is it possible, they want to know, that they never learned any of this before. They soon come to realize how important it has been for the West to deny its cultural roots in the Muslim world in order to maintain an image of Islam as a primitive force in the world. The primitive nature of Islam then becomes a mirror in which the West sees its own cultural superiority reflected back. With the ongoing rise of Islamophobia in the West, breaking down this stereotype has never been more important, and Dr. Zulfiqar Ali Shah with his new book Islam and the English Enlightenment makes a major contribution to doing just that.

Never before to my knowledge has the cross-fertilization of Western and Islamic ideas been so encyclopedically documented as it is here. In reading Islam and the English Enlightenment, you will never see the relationship between Islam and the West the same way again.

Blurbs for the book “Thomas Aquinas and Muslim Thought”.

Zulfiqar Ali Shah is a thorough historian of so much, as well as being an astute theologian–AND THE WAY HE BRINGS THEM TOGETHER IS MASTERFUL! I learned so much from this study, and found it fascinating as well–given his limpid English.  And I found his judgments of matters to be just that: judicious! He has a flair for narrative, so the often disparate topics meld together effectively. SO I CAN ONLY THANK HIM for bringing it all together so seamlessly. The study is a must for those engaged in cross-cultural influences in medieval philosophical-religious thought.

St. Thomas Aquinas and Muslim Thought offers an insightful complement to an understanding and appreciation of Thomas Aquinas. Professor Ali Shah’s study shows the impact of Islam on Western Europe, which exposed Aquinas to cultural tensions, political conflicts, and religious (theological and philosophical) controversies. In addressing these, Aquinas was in part directly influenced by, and in part significantly indebted to, Muslim theological and philosophical thought. Despite differences that remain in Aquinas’ thought because of his Christian commitments, we are provided with a view that shows Aquinas to be respectful of, and in dialogue with, the religious diversity ̵ Islamic and Jewish-of his time yet instructive to our own.

Dr. Shah’s meticulous exploration of the intellectual relationships between Thomas Aquinas and the rich world of Islamic scholarship of the time is a fascinating study and well worth the time of anyone interested in that field of study.  I found this volume a wonderful resource for my own understanding of medieval philosophy and theology.